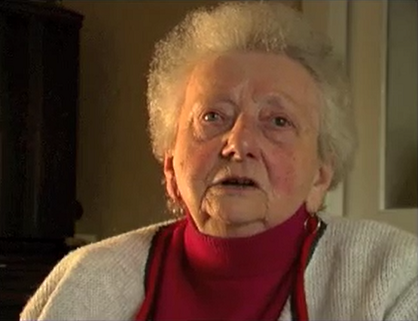 
Among others, a committee got established, where you were supposed to register free flats. And that committee assigned. And it was at Szostak’s. Czajka before. There, in those offices, there was this committee. There you established agreements. And we, I remember, used to have 2 spare rooms and a shop. There were too few rooms registered. I know that the father also dedicated the shop to the Jews. It was… all together, we had about 10. First, the Süss family. Then there was this random couple, where his wife had departed early for Israel. If I saw the pictures, I would recognize them all even today. And he’d met this divorcee and they decided to rent that room for themselves. And they lived the whole year there. And the Süss’, the whole year upstairs as well, but you lived with them really well. Really well. What can I say? In Germany, in Essen, they used to have a shoe shop. A big shoe store. The first wife died. The sons from the first wife were in Israel. They were older. And he got married for the second time, to his housekeeper. She was German, catholic. A very handsome woman. And such… such a good person she was. He had two kids with her. One boy could have been 16, I can’t remember precisely. 16 or 17. And the second boy – 8 years old. They were really pious. She would go to the synagogue as well. Because it [the synagogue] was here at ours [in Zbąszyń]. They would attend all the ceremonies there, in the synagogue. Sometimes they would have some kind of meetings. Well, he was way older than her. He was very much silver-haired. He looked as if he was pretty much emaciated, but maybe that was the result of an illness or maybe because of the worries, since they seemed to have had a… good life in Essen. A good life. Mrs. Süsse, but she even managed to go to Essen. She packed all her important things there. I mean, the furniture and all those household things that were needed, and she brought that to Zbąszyń. They rented a flat there, through my father. He was a good man we knew, that Brychcy. Such a Polish German he was, because he got married to a German woman, but he spoke Polish fluently. And right there, at this Łąkowa Street, all that furniture stayed there. The furniture stayed there. And they, with the suitcases, left for Lwów. They signed up for Lwów and went there. And now I don’t know how many days, three weeks, I don’t remember that precisely, after their departure the war started. In fact. [Did all those things stay in Zbąszyń?] Yes. Yes, they did. And I… on that letter that came after the war… the letter that they wrote, asking if we were alive and what happens, or happened, to their belongings. So I wrote back that those things stayed because I even knew whom they’d stayed with. I knew who took them. I knew. So, to this letter, I didn’t get any… I wrote back but then I didn’t get any answer. I don’t know if they wrote or not. Or if the tenants took it, because here in our flat, there lived a… there lived a tenant. And the second part was occupied by German engine drivers. Kruszyński let it out to the engine drivers. I don’t know if they wrote again or if they didn’t write back. I don’t know that. But they planned to leave for Israel from Lwów. I know that for sure. Because that was spoken, as they still were here. On the evenings they would often go downstairs and talk to the parents. Like good buddies.