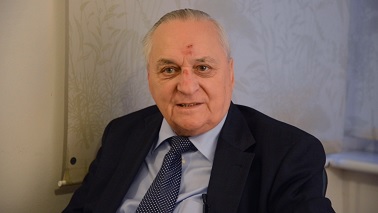 
…we wake up, go to school, and suddenly there are loads of completely foreign people, lots of them. It’s hard for me to say, how many thousands there were, but anyways there were masses. At once on the street and everywhere. People foreign to us. And it turned out soon, that those were the ones who had been pushed early morning from the German side, to cross the Polish border. What I learned afterwards, it lasted several hours before the border control got a permission to raise the bar, because the Germans pushed harder and harder and abused the people on the border, the ones who did not want to cross. Later on we would see these people daily. At our flat, as I came back from school, there was a lot of foreign people. Exactly those Jews, who came from Germany, or got deported from Germany. It was in such a way that each seat meant one place to stay for those newcomers. So, since we had 4 chairs, 2 armchairs and a couch, then each of these places was one place for those expellees. On that seat they lived, sat. Elderly people were with us, too. And one person, a woman, seriously ill, had the couch at her disposal. She would lie down, all the time she was lying down. She would stand up only when she had to. She was that sick. What was it, how was it – I don’t know. At our home, at once, on the same day, the living conditions altered. The conditions of habitation. Cohabitation. We had one room and in that room there was a number of seats and that number would be occupied by those people. The bedroom and the kitchen were for us. Not always, because they used the kitchen, too. These were the first, shocking in fact, impressions. Not that we resent it. Not at all. But it just got tight, right? I had a younger brother. How old was he? Perhaps 3 back then. And I was alone all the time. The most grown-up one, eight-year-old then. That was the situation. We were interested, as well. What? Where? The garrison full of people, inhabited by those newcomers. Besides, what stays in my memory, is that usually young people – they had no place. At least in the first two weeks, before they got relocated to various places within the town. What we saw there, from near, it was those people living on the meadows and in the forests, the ones nearby On the area of the military training, after the army had left Zbąszyń, one engineer (I can’t recall what his name was) established a wicker plantation. And later they produced wicker furniture. But it started after the army had left. So over there, in that wicker, on a meadow by the Obra river and in those forests nearby – everywhere were these people. Because there was no space. Later on they got accommodated – at the Grzybowskis’ mill, on the Wolności Square, at the school, on the playground, on the stadium, at the sports hall. That was maybe after a week or after 10 days that they got accommodated. Initially, it was all under the open sky.