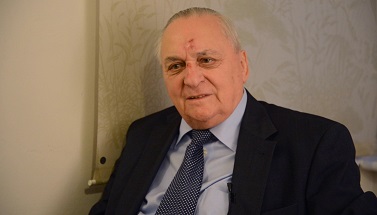 
I only remember that one engineer, named Heiselbeck. And neither can I remember where he was from. I only know that he left for England. Still in ’38, or maybe in the beginning of ’39. So he left soon. And these other surnames? I can’t remember. The people who lived with us, they stayed until our departure. That is, the departure of mine, of the mother’s and of my brother’s took place in the beginning of June ’39. Because the state officials received a secret – so to say – instruction to move their families from the border. That is, from all these towns in the borderland, deeper into the country. And it was neither in July, nor in August, as we would normally go for vacation, but as soon as June. So the school ended a bit earlier and we left to Września near Poznań already in June. Those were elderly people. People of old age. And religious. Kind. Spoke German. Parents spoke German, so there were no problems with understanding. They were, as I would say, really cultured people. They were religious, yes. But they wouldn’t go the whole day, there were only, it seems, morning and evening prayers. And then in the room, they were all together, the door was locked, and the candle and so on. They were religious people. And we had no problems with them. In human relationships, absolutely not. I suppose they rather belonged to the wealthier ones. Or to the wealthy. The issue of food, I have no clue about that. They rather prepared it on their own, but anyways, the trucks arrived in the beginning. With bread and butter. The truck stood on Graniczna street or at the intersection – of Graniczna and the one that leads to the railway station. The ones who approached were given a loaf of bread. And some butter from a barrel. The barrels were full of that. Loads of people initially ate that way. Later there were the field kitchens. Where from? Where? How? I don’t know. But I know that my father told me that it was the Committee to Aid Jews. And as far as I remember, the committee was local, established by the deportees, but there would always be somebody, I guess from Warsaw, to provide communication between various committees to aid. And I know that later on that committee would pay for the lodging.