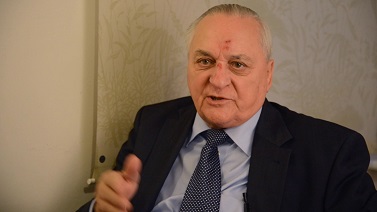 
We lived in the post building. But when it comes to the Jewish post, in the beginning the packages, the deliveries would arrive. And the Post Office Number 2, at the Railway Station, couldn’t handle, those thousands of people and thousands of packages that arrived. And they realized at once that it would not work, so the Post arranged a special branch of the Jewish post in the old building of the railway station. That Prussian Railway Station that had not been really used, beside the movies. And maybe a sort of a warehouse was also there. But at the time there was only a post office. That is, a branch of the other post office, from the Railway Station. Exclusively for the Jews. It was like this because they did not receive packages on home addresses, but it was all on poste restante. And that’s the difference. Back then, a postman could take a package or a letter and bring it to the respective address. And here, it was all on poste restante. Before, there would be one or two packages on poste restante in a week. For some kind of a holiday-maker or for someone who was not registered in the town. And here, there were thousands. All for poste restante. Only “Zbąszyń”, poste restante, period. Surname. I only remember that when I was there at the old post office, there were heaps of letters and packages. Incredible amounts. And beside my father, who was managing the place, also the mother of Zenon Owoc worked there. But there was a couple of other employees, Poles. And Jews were for help. If somebody wanted to, they would be accepted to come and help out. Because all the packages that were arriving, they all needed to be sorted somewhere. There were no racks. No closets. No shelves and so forth. It was all on the floor. There was only a table, a sort of buffet, where one could hand out or sign that he or she received the package. It was a tremendous work.